Astrology is deeply woven into Hinduism as the belief that cosmic planetary forces influence your life’s destiny. It is a fatalistic and fixed view of life. Most Indian astrology comes from the Vedic tradition. “The basic premise of this astrology is that all things are linked. Your karma or fortune is determined by a predestined cosmic design. You are a soul incarnating in a body at a very specific time and place, and your life is a reflection of the greater whole into which you are born, just as flowers bloom at certain times, when all conditions are perfectly congenial. So is the case with our births on this planet, according to the theory of karma.”  Your karma is thus linked to planetary influences that control your life. Karma also ensures that you will reap what you have sown in your past lives.

Astrology in Hinduism is used to predict one’s future and to determine the most auspicious time to act. Auspiciousness indicates good luck and favorable circumstance. It is a strong belief that there are fixed times when a certain endeavor might or might not be successful, which includes many important decisions, such as when to travel, marry, have surgery, or visit your mother.

Most Hindu families have an annual almanac that shows the phases of the moon and position of the stars. Auspicious and inauspicious days are clearly marked. Misfortunes are frequently attributed to inauspiciousness, and this belief can become a bondage. Many Hindus fear living their lives without the guidance of an astrologer.

For all the gods of the peoples are idols, but the Lord made the heavens. 1 Chron 16:26

PRAY FOR Hindus and Westerners alike, that they will recognize the ultimate power of the God who created the planets and the stars.

PRAY FOR Hindu astrologers (holy men) to have a revelation of God’s majesty as they contemplate the heavens.

SOME PEOPLE believe they are cursed or unlucky because of astrological signs. Pray that they will hear the gospel and be released. 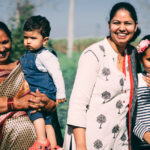