Yua grew up in Japan surrounded by traditional religious practices. Every Saturday, Yua and her friends went to the Buddhist temple for Japanese calligraphy classes which took place after chanting and meditating. They also went regularly to the Shinto shrine to learn martial arts. First, they would clean the shrine, chant, and meditate before practicing the martial arts called “Kendo” as taught by a Shinto priest.

Buddhism first came into Japan in AD700-800 through scholars who introduced writing systems from China. At first, it was a belief for rich and educated people. As Buddhism spread in Japan, it merged with the existing spiritual traditions of Shintoism, which is often described as an animistic religion with a focus on many spirits who inhabit the natural world. Buddhism and Shintoism were practiced together, with little distinction between them until the late 1800s. At that time, the Japanese empire was restored, and Shintoism became the state religion.

The Japanese have adapted their beliefs to include many spirits. Pray for them to have the revelation of Jesus, who came to show us the Father. (MATTHEW 11:27)

Only 1% of Japanese people are Christians. Pray for more workers to share the gospel here. (MATTHEW 9:37-38)

Read PSALM 104 and be inspired to pray from it for the Buddhist people of Japan. 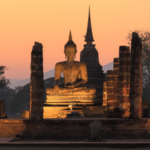 Day 8: Images of the Buddha

Getting to the Harvest is Doable 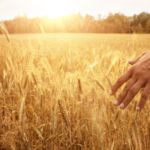