Yudhea’s* parents have Christian backgrounds, but his extended family is Muslim. God started working in Yudhea’s heart while he was in high school. At that time, he hung around with a tough group of friends. He wasn’t following the Lord, but God was pursuing Yudhea.

After he surrendered his life to the Lord, Yudhea began hearing about the spiritual needs of his country in Southeast Asia. He learned that entire people groups — millions of people — don’t have access to the Good News. Even if they wanted to know more about Jesus, there was no one to tell them. This broke his heart, and he felt the Lord was calling him to go to his people and tell them.

Soon Yudhea was connected to a local organization that sent him out to minister. Unfortunately, his team had issues that eventually caused him to return home feeling defeated and alone. That was when one of Wes and Angie’s local teammates felt the Lord prompting her to contact Yudhea.

Over the course of several discussions, Yudhea realized he still felt called to the Unreached. He decided to move, so he could work with Wes and Angie’s team and eventually be sent back out as a disciple-maker to the Unreached.

Before Yudhea left for the field, he spoke with Wes, reflecting on his journey. They talked about God’s beautiful plan and how He had shaped and molded Yudhea’s heart during this past season. They rejoiced together, knowing God will accomplish His plans. He is trustworthy. He is good.

Please pray as Yudhea joins a team on another island focusing on starting a disciple-making movement among a cluster of Unreached People Groups. 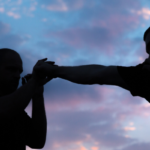